So we are moving from the major metropolis of Dallas/Fort Worth to the beautiful farmland of the Shenandoah Valley in about 6 weeks. I can’t wait to get back to Virginia–I really can’t; but there are times when I have access to some AMAZING things in DFW, and I wonder if i will have any similar opportunities when we move. Meeting Ina May Gaskin was one of those amazing things.

Some of you may be wondering–who is this Ina May Gaskin woman she’s talking about? She’s a Certified Professional Midwife (CPM) that has transformed the way that many people think about midwifery in the United States. Her biography says that she has helped around 1200 babies come into the world in the last 40 years. Sounds like a lot of babies, right? Don’t worry, I did the math for you: that’s 30 births a year, or 2.5 births a month. I think you’d be hard-pressed to find a well-respected OB that has assisted in only 2-3 births a month over the last four decades. Yes, she travels a lot; yes, she’s written several books; yes, she’s done a bazillion speeches–she’s busy! But after listening to her talk this last weekend, 2-3 births a month is about all she would ever take on.

During my pregnancy I read Ina May’s Guide to Childbirth, and admittedly, there were parts that I loved and parts that were just a little too “hippie” for me. But hey, each woman’s birth story is her own, so I just kinda went with it! There were a ton of helpful insights in the book, and I highly recommend it to any woman who is preparing to give birth. So there’s my Ina May shpeal–what is about to follow is a collection of thoughts. They may or may not all work together. I’m just jotting things as I remember them so I can look back and reminisce about what went on this weekend!

Friday Night–Dinner at the Reata

Just a few days before the event, I was invited by a “birthy” friend 😉 to go to dinner with Ina May at the Reata in downtown Fort Worth. The room sat about 40 people. We thought we would be late, but we actually got there a few minutes early, and I had a moment to introduce myself (like Ina My wanted to know who I was–ha!). I actually had a couple of opportunities, but I chickened out on the first two because I hadn’t come up with what to say yet (**lame**). When I saw a dear midwife friend introducing herself, I realized I could sort of piggy-back off of her conversation, so as soon as she stepped away, I got the courage to “step up to the plate.” 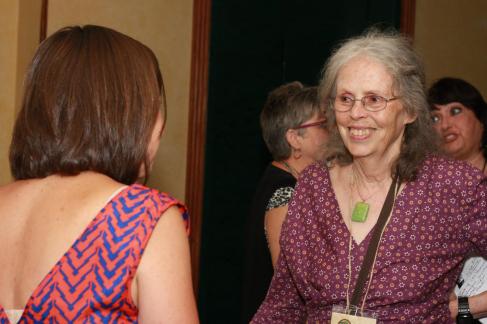 I think I said something along the lines of, “Hi, I’m Nicole! I had a baby in September at a birth center, and I work there now! And my husband is a chiropractor, and he specializes prenatal and postnatal care for mom and baby!” At which point she interrupted me: “Oh that is fantastic! We appreciate the work that our chiropractors do!” And then I jumped back in (did I just cut Ina May Gaskin off??), “And I really just appreciate everything you’ve done to spread the word about care for expectant mothers, and especially midwifery care! And it is just really a pleasure to meet you! And thank you for being here! And I hope you enjoy your stay in Texas!” And then I very awkwardly walked away, realizing I couldn’t figure out how to end that conversation. Getting back to my table I realized that I had been a little bit of a blubbering idiot and the only part of the conversation that she commented on was directed toward The Chiropractor (really?? I should have given you more stats about my birth! I promise you would have been impressed! Ok, maybe not impressed…satisfied. Maybe that is what you would have been…). 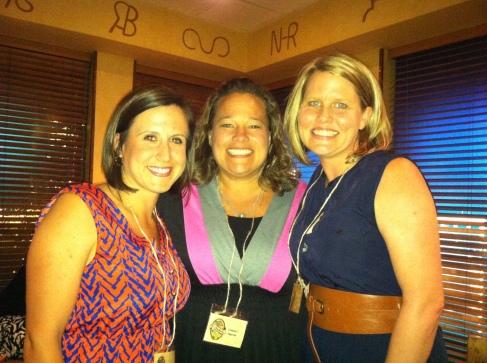 Dinner with my midwife Christy and my “birthy” friend Jeanine!

The dinner was delicious. I was able to sit with my midwife (which is always fun!), my lovely “birthy” friend, and I made a couple of new friends along the way! After dinner, I knew I had been away from my “I don’t like bottles or solid foods” baby for long enough and he was probably starving, but I really wanted a photo with Ina May, so I awkwardly walked over to her table, and she graciously agreed! 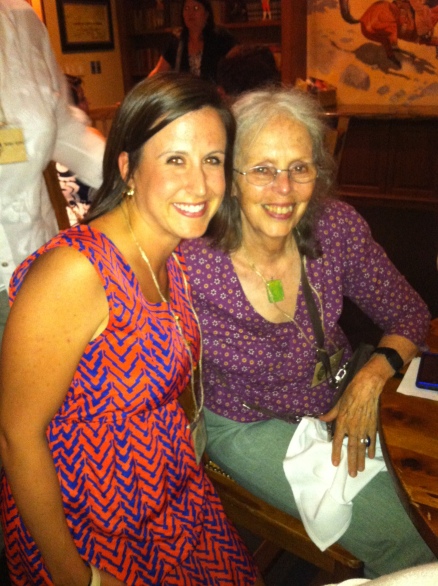 After dinner with Ina May

And here’s the part where I was so worried about “I don’t like bottles or solid foods” baby that I rushed out without paying for my drinks (sorry, Jeanine!). No worries, I paid her back 😉

So one of the perks to paying to go to the dinner with Ina May was that we got to “cut the line” for the book signing the next day. This was awesome because we didn’t have to rush to get into the line, but I felt like the world’s biggest jerk walking by all of the ladies who were so patiently waiting to get their books signed (if any of you are reading this, I apologize! My wristband said I could do it!). The Chiropractor and “I don’t like bottles or solid foods” baby came along with me to this event because really my journey through birth was OUR journey through birth, and I felt like it just wouldn’t be right to not have them there.

We walked up to her table, and I turned into a blabbering idiot again: “Hi, I don’t know if you remember me, but I was at the dinner last night! My husband, oh this is my husband (pulling him closer), is the chiropractor that works with expectant moms…” She interjected, “Oh of course! Yes, I remember you! So glad you could bring the whole family!” At which point she signed my copy of Ina May’s Guide to Child Birth and we gathered around her for a picture. I remember someone saying, “Hold the book up so you remember which one she signed,” and since we were in front of the camera, I just did what people told me to do. As soon as the shutter went off, my own mind reappeared and I thought, “So I can remember which one she signed? How am I going to forget when I put this thing in a frame!” 😉 And then I remembered my thoughts from the night before–tell her something awesome about your birth!! “And this is my baby…well, my BIG baby…he was 9lbs 6oz when he was born and I had an 8 hour labor and no tearing!” “That’s great!” she said. Had she heard me? “No tearing! Some people think that it can’t be done, but it can!” (Did I really just say that to Ina May Gaskin?! Of course SHE knew it could be done! She trusts the birth process more than anyone on the planet! I didn’t have to tell HER that it could be done…and this is the part where I awkwardly walked away again!) 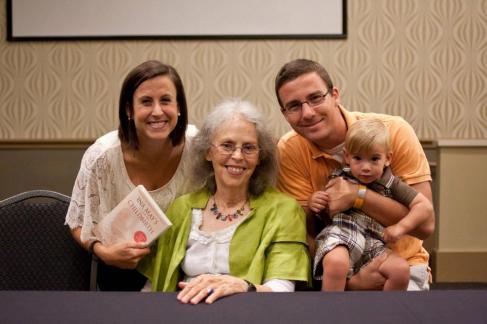 I was really excited to listen to this talk. Truthfully, she could have talked about how to flip hamburgers, and I would have been excited (which she would never do…she’s vegan!). Another one of my perks for going to dinner was that I got to sit in the front row–yes, the FRONT ROW–I was ecstatic! 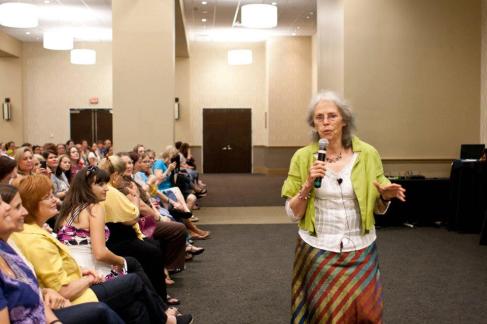 What I loved most about this talk is that it wasn’t all that structured. She told the story of her first birth, of how she was getting ready to push and everything was going beautifully, and because of that hospital’s procedures, she was given medicine. The next thing she remembers, she woke up, not pregnant anymore. When they brought her baby to her room, she felt a total disconnect–wasn’t sure if the baby was hers because she felt no connection. She realized this wasn’t right. And thus began her journey. 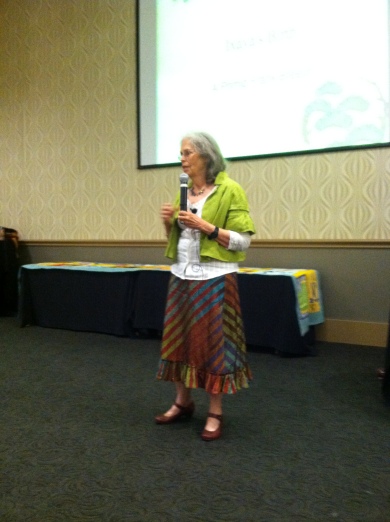 Tellings us her birth story.

She had a few hippie thoughts, but for me, I was surprised at how hysterical she was! 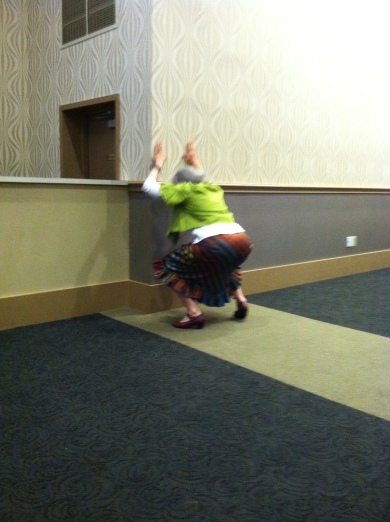 She also had some very amazing statistics:

She told stories of birth from around the world where doctors literally stand above the mother and PUSH the baby out of mom’s belly (ouch!) and in other places (like the Scottish Isles) where midwives travel all over to make sure a mother is given the best care possible (and OBs are not legally allowed to refuse to help midwives when asked).

She talked about the complications that mothers experience from unnecessary c-sections and inductions. She brought along her quilt that has one square for each mother who has died unnecessarily from MEDICAL childbirth complications (we are not living in Little House on the Prairie here, folks; it was amazing to hear how these women died simply because doctors are taught to rely on technology, rather than skilled training, and how they are taught to fear things like breech vaginal birth). By the way, she does not fault the doctors for this–they are learning what they are taught. She faults the system in which they are taught.

What amazed me most about the entire talk was her openness and lack of rebellion. I pictured her to be this renegade hippie who was going to say that hospital births were unnecessary, but she didn’t–not at all, in fact. She feels that maternal CARE is what is most important. Be it at home, in a birth center, or in a hospital. Every woman DESERVES that personalized attention (one-on-one, from someone who has become a friend and a support…not a professional running between 10 rooms to check on everyone), DESERVES to know that they are SO capable of birthing their baby (your body is not broken, your baby is not too big, breech birth is safe with someone who is trained to know what to do and who is not fearful of it), and DESERVES to be supported in her decisions. It is up to women to take responsibility for their birth, and to find the person to provide care that brings the sacredness back to birth and to the family.

She also gave some great resources for us to Google (which I have done for you):